Line of Duty's Martin Compston and Peaky Blinders star Sophie Rundle have teamed up for new The Nest, and we're getting The Hand That Rocks the Cradle meets Jenna Coleman's The Cry vibes already.

The five-part Studio Lambert thriller series for BBC One follows loved-up couple Dan (Martin) and Emily (Sophie), who live in a huge house in a beautiful location just outside Glasgow and want for nothing. All that's missing is a baby, but they've been trying for years with no luck.

Through a chance encounter they meet Kaya (played by newcomer Mirren Mack), an 18-year-old from the other side of the city, whose life is as precarious as theirs is comfortable. When Kaya agrees to carry their baby, it feels like they were meant to meet... so was it really by chance?

The emotional thriller throws up troubling questions such as who is Kaya, and what has brought her to this couple? Can the dreams of Kaya, Emily and Dan be fulfilled or have all three embarked on a relationship of mutually assured destruction? 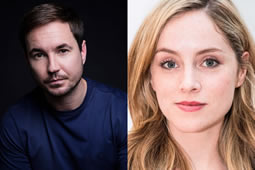