Studio Lambert head of drama Sue Hogg won the Envy Producer Award at the Women in Film and TV Awards at the London Hilton this week.  Last year, the same award was won by Tania Alexander for her work on Gogglebox.

Sue’s award was primarily for her work on the acclaimed BBC One miniseries Three Girls made by Studio Lambert in association with BBC Studios.

In an unprecedented coup at the WFTV Awards, the writer, director and editor awards all went to women who had worked in those roles on Three Girls; screenwriter Nicole Taylor was presented with the Creative Skillset Writing Award, Philippa Lowthorpe won the Deluxe Director Award and Una Ni Dhonghaile won the Technicolor Creative Technology Award. 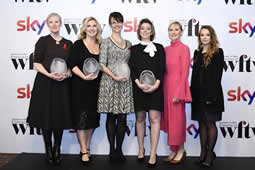