Apr 2021 The Hustler renewed at ABC for summer schedule

ABC has ordered a second season of The Hustler.

Produced by Studio Lambert and hosted by Craig Ferguson, the show follows five contestants as they collaborate to answer a series of trivia questions aiming to build a collective prize pot, but there’s a twist.

“Outside of things like Holey Moley, we’re known for our reboots of old franchises,” said Rob Mills, EVP, Unscripted and Alternative Entertainment, Walt Disney Television. “So, it was really exciting that Stephen Lambert came in with something that felt kind of wholly original and something that we could make new and make work.” 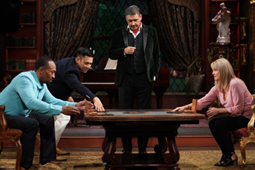