The uber-successful health guru Jillian Michaels is showing off a side of herself the world has never seen before in Studio Lambert's new eight-part docu-series Just Jillian.

The series follows Michaels as she takes on balancing the demands of her ever-growing empire, parenting five-year-old Lukensia and three and a half-year-old Phoenix with doting partner Heidi, and trying to devote enough quality time to all of them.

The premiere is on E! Tuesday January 19th at 10pm ET/PT. 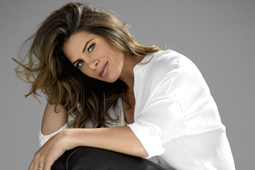