The hilarious, TV-obsessed couchers are back on Bravo for a fourth season of Studio Lambert’s The People’s Couch on Friday, January 15th at 10 p.m. ET/PT with twelve new hour-long episodes.

The series enters the households of recurring families and friends sitting in their living rooms as they watch the best tv shows of the new year. 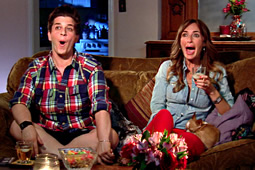